They have been installed in a bid to drive more traffic, both foot and vehicular down to the waterfront.

This comes as part of the boulevard project which is expected to cost £8.9m and includes the development of a dynamic tree-lined city street between the River Tawe bridges and Princess Way.

The decorative crossings have been created using a product named Duratherm. It is a special preformed thermoplastic material that is inlaid into an imprinted asphalt surface and bonded using specialised infrared heaters. According to the company, the process of inlaying Duratherm into asphalt protects it from wear and ensures that it retains an attractive look for many years.

The next stage of the waterfront project is to use developments and environmental enhancements including new retail facilities which will make the it more attractive to local, tourists and businesses.

Cllr Chris Holley, Swansea Council leader, said: “The boulevard will bring major improvements to the main gateway into Swansea by improving the appearance of the area and helping traffic flow.

The boulevard scheme is one of a number of projects being funded by the Welsh Government, the Wales European Funding Office and Swansea Council to improve the Swansea city centre experience for residents, businesses and visitors to the city. 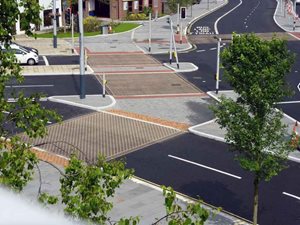