In May of 2015 the DC Commission on the Arts and Humanities (DCCAH), the DC office of Planning (DCOP), and the Office on Asian and Pacific Islander Affairs (OAPIA) came together “to announce a Call to Artists:  Request for Proposals Chinatown Barnes Dance Public Art Project” (Public Art 1).  This public initiative was to be created in order to redesign a crosswalk at 7th and H Streets NW as a centerpiece to Washington DC’s Chinatown district.  With the winner(s) receiving a budget of $30,000, artists and teams of artists were asked, “to submit up to three original two-dimensional design proposals for the crosswalk”(Public Art 1).

The new design allows for pedestrians to continue moving as traffic does with a green light, “but they will also get the chance to cross in any direction during a 29-second period when traffic is completely stopped” (Krouse 1).  In 2009 35 vehicle accidents resulted in four pedestrians suffering from injuries in the intersection and the hopes were that the new design would help decrease incidents.  A team from Charles Bergen Studios was selected for their design work.  Ennis-Flint® Certified Applicator, Alternative Paving Concepts was hired to perform the installation of their TrafficPatterns® preformed thermoplastic material.

In June of 2016 application of the material was completed.  Charles Bergen, the winner of the commission, researched ideas that would resonate throughout the community.  He decided that the traditional Chinese New Year Dragons and signs of the zodiac would adorn his vision of the intersection.  Choosing the material to use in the intersection would prove to be a challenge.  “Bergen had originally conceived of doing it all in paint, but had to reject that idea because it would not have been durable enough for the side crosswalks” (Pickering 1).  Ennis-Flint’s TrafficPatterns® Preformed Thermoplastic proved meet the durability challenges that were presented.

Going into further detail, Bergen went on to say; “The long curves, colorful scales and expressive heads of the dragon lead the pedestrians from one corner across to the other.  The twelve lunar zodiac symbols are placed in gaps between the crosswalk bands.  Here in the perpendicular crosswalks they forever reenact the race across the wild river that determined their sequence in the lunar calendar and allowed them to become zodiac signs forever” (Landau 1). 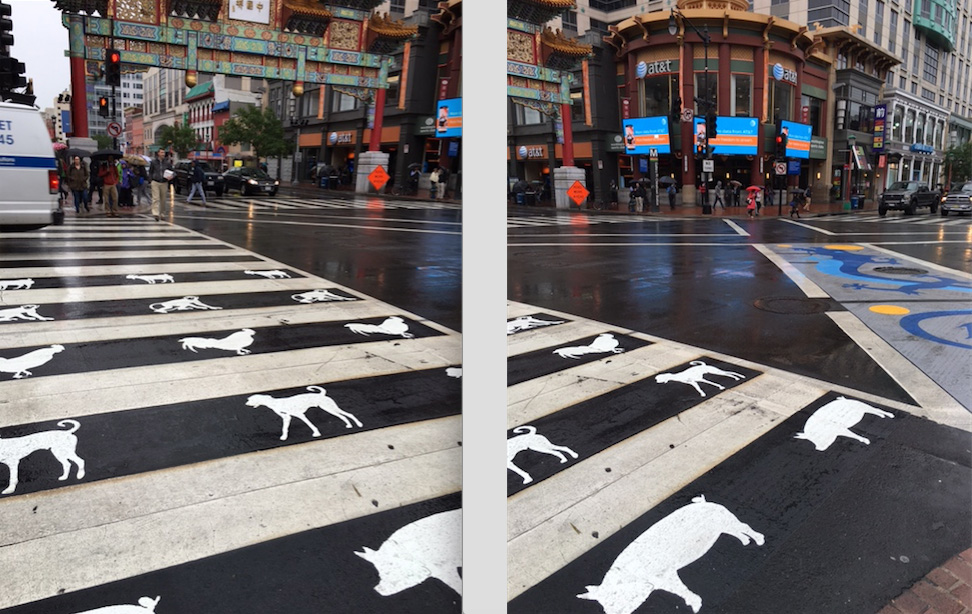 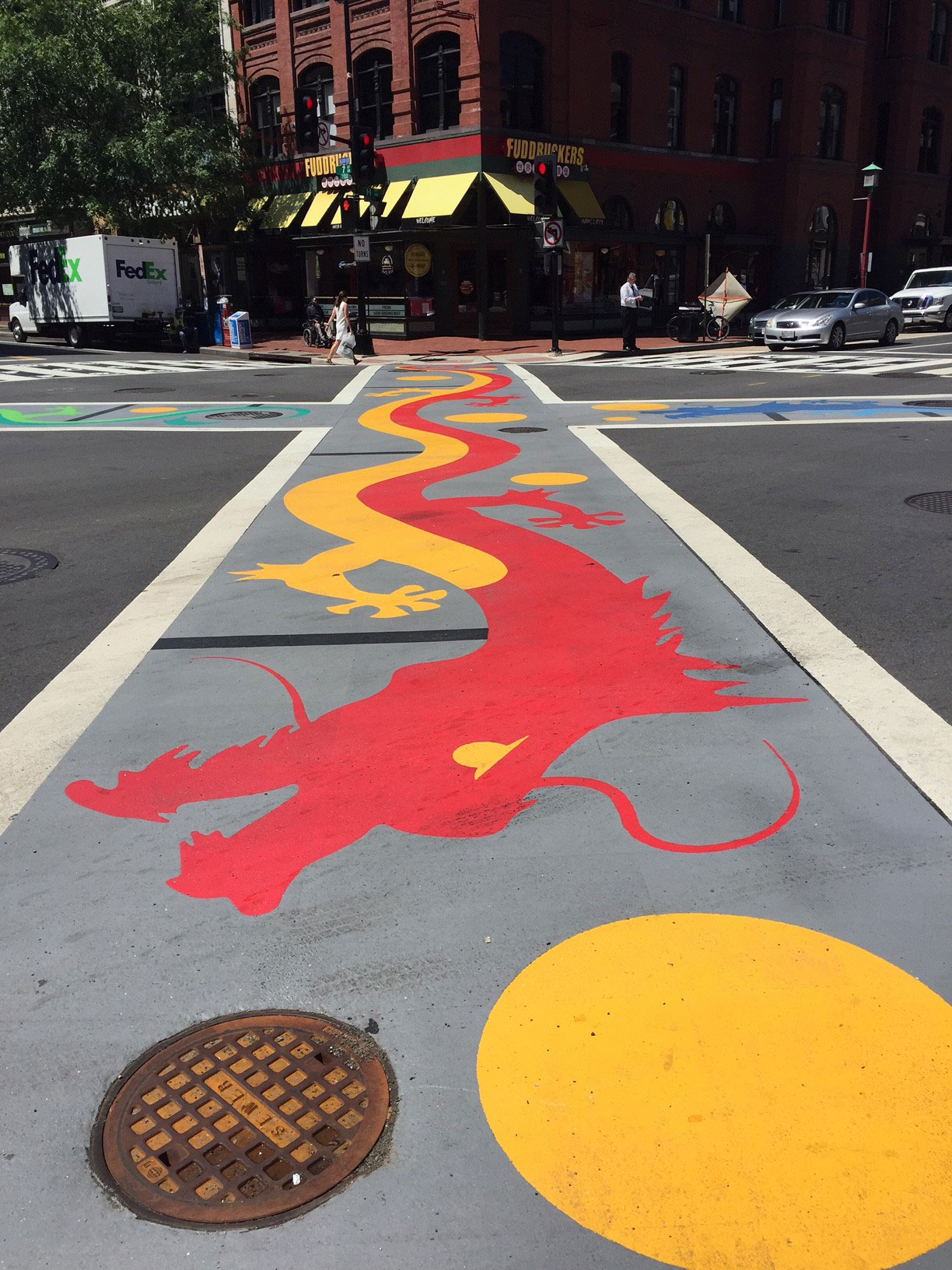 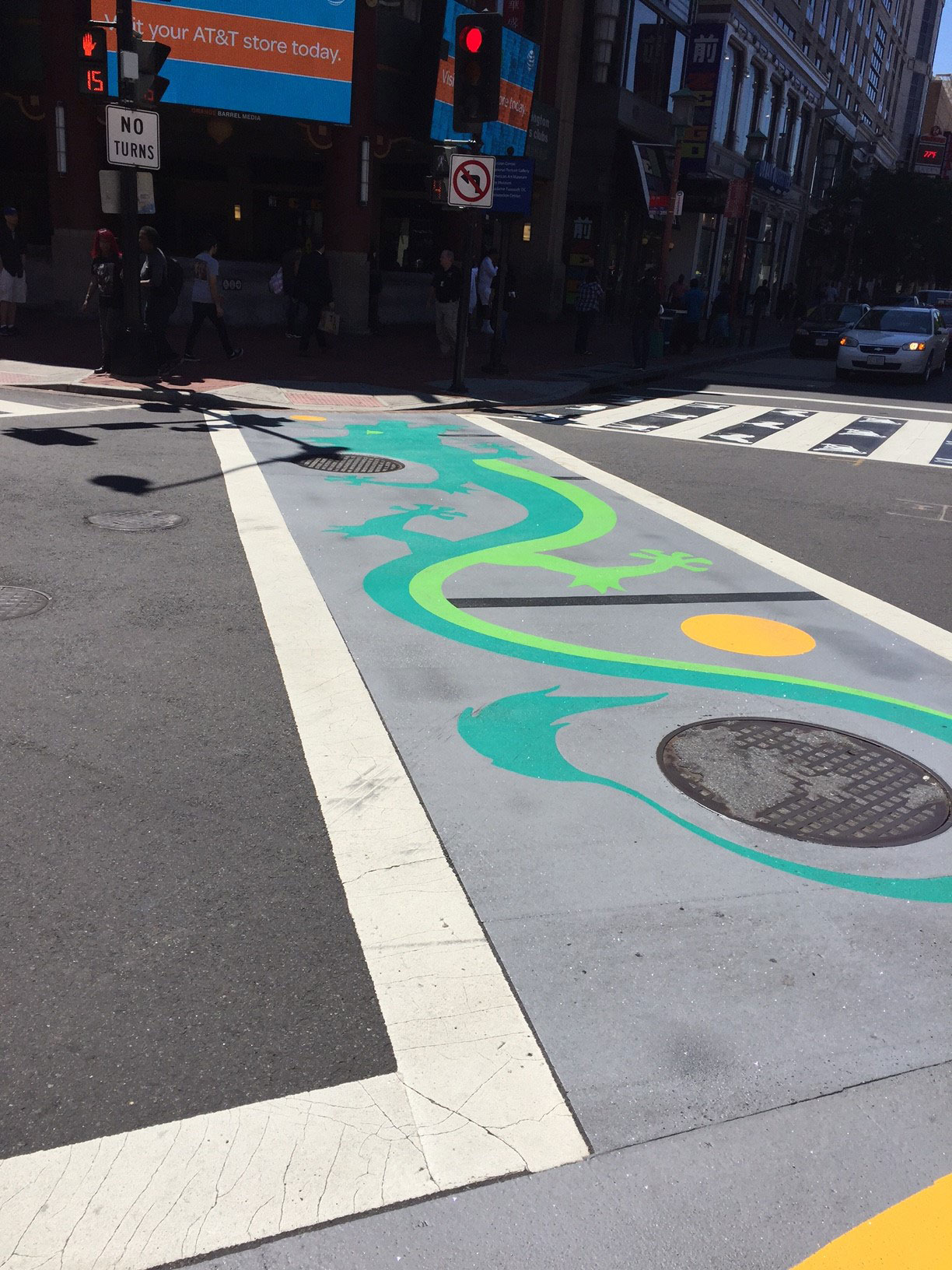