TrafficPatterns at the Tallahassee Marathon

For the first time in the 42-year history of the Tallahassee Marathon, hundreds of runners will course through downtown Tallahassee, instead of the St. Marks Trail.

It’s a switch that has runners a little nervous, race directors excited and leaders of downtown churches searching for ways to deal with what they anticipate to be a huge influx of Sunday-morning traffic.

“We are trying to get ahead of the challenge because we don’t want people to show up surprised on a Sunday morning,” said the Rev. Bill Shiell, senior pastor of First Baptist of Tallahasee. “Parking is already at a premium and we’re faced with additional challenges. Our first priority is safety for everybody. And we’re here to love Tallahassee and to serve.”

The day, which includes a marathon and a half marathon, begins at 7:30 a.m. St. John’s Episcopal Church serves as the de-facto starting line, and runners will end up at City Hall – extremely close to First Baptist on West College Avenue – after winding through downtown Tallahassee, Florida State and Cascades Park.

“We wanted to find a way to get the community more involved with the race,” said race co-director Eric Godin. “For the past few years, it’s been on the St. Marks trail, which is great for runners who are trying to get a really fast time.

Elizabeth Rosario, the race’s other co-director, said there has been a lot of excitement surrounding the move. She and Godin said there should be about 1,300 people in this year’s race – the largest turnout in the race’s history.

“Everyone has been really ecstatic about it and really excited about it,” she said. “We’ve done the door-to-doors and everyone is excited to hear about the race. I haven’t encountered anyone saying no to the race. Some of the businesses are concerned about traffic, but I think we’ve addressed those issues.”

Since the race is run so early, both race directors said businesses shouldn’t be hurt much. To help direct traffic and keep runners and pedestrians safe, they said there will be roughly 90 TPD and FSUPD officers and about 100 on-course volunteers.

“Literally, at every intersection of the course, we’re going to make sure that runners know where to go and that cars aren’t running into them,” Godin said.

Last year, the marathon’s top finisher, Mark Chepses, finished the race in 2:19:10. A time like that would mean runners would begin crossing the finish line at around 9:49 a.m. The last person to cross the finish line did so in just over six hours.

If runners are crossing the finish line between 9:49 a.m. and 1:30 p.m., there’s bound to be some overlap with the race and First Baptist’s Sunday worship, which starts at 9 a.m.

Shiell isn’t too worried – even the Bible looks favorably upon marathons.

“The bible loves a good race,” Shiell said with a laugh. “I think the race directors intentionally decided to start and finish the race at churches.”

It’s true. The Bible is a good place to turn for anyone looking for inspiration before a race.

•1 Corinthians 9:24: “Do you not know that in a race all the runners run, but only one gets the prize? Run in such a way as to get the prize.”

•Hebrews 12:2 is commonly shortened to “run with perseverance.”

•It’s hard to attend a marathon and not spot at least one runner with the famous Philippians 4:13 verse: “I can do all things through Him who strengthens me.”

Shiell said First Baptist – along with other churches in the area – will stand at the ready to give runners water. In regards to his congregation, he said he wants to make sure seniors and children are adequately taken care of on Sunday morning. The church recently released a statement saying services will be held at their normal times.

The statement also said parking will be at Kleman Plaza, coming down Bronough Street, and shuttles will pick up churchgoers from the Eastside Parking Garage on Calhoun Street.

“We are trying to turn a challenge into an opportunity,” he said. “We are excited that the marathon runners are going to be going through the neighborhood.”

He added, “We’re trying to figure out how our downtown community can be a place for everyone, both a faith and fitness communities.”

The 26-mile course change also brings some additional difficulty for the runners. The full course has a total ascent of 1,176.45 feet and a maximum elevation of 261.22 ft.

Felton Wright, a veteran of 15 Tallahassee Martahons, said the new course will definitely be more difficult.

“This is the first major attempt to show off Tallahassee and run the race right through the heart of Cascades, the Capitol and FSU,” he said. “It’ll be a slightly harder course, but it has the potential to increase participation because of the location. I applaud the directors for taking it on, but it’ll increase the workload on the directors.”

Godin and Rosario, both marathon runners, said anyone who participates will – despite the difficulty – appreciate the course’s new location.

“People are really excited about runners going through town and having people cheering for them. We’ve got, between water stations and cheering stations, people on every mile of the course,” Godin said.

“After this, we’ll have to figure out what’s the trade off? Is it better to have hills and spectators, or should we make it totally flat and not really have people cheering?”

Where: Race starts at the intersection of South Monroe and East Jeffereson Streets 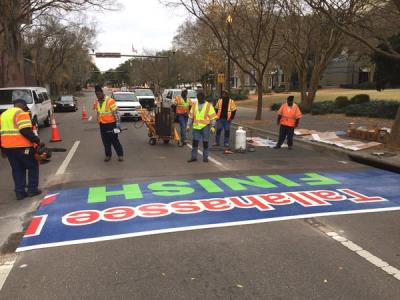