Santa Rosa has given the green light to new bike lanes designed to help cyclists navigate some of the city’s busiest intersections.

The city has installed its first bright green bicycle lanes on Santa Rosa Avenue and has plans for 10 more in locations where bicyclists and vehicles are likely to cross paths.

Workers recently gave the pavement a verdant paint job at the intersection of Third Street and Santa Rosa Avenue in conjunction with the work to reunify Old Courthouse Square.

The other intersections — including busy locations on Mendocino Avenue, Stony Point Road, Sonoma Avenue and Marlow Road — are slated for facelifts this spring.

“This is just kind of round one to see how it works,” said Rob Sprinkle, the city’s traffic engineer.

More could be installed later if they prove popular and effective, he said. The lanes are being funded with about $78,000 in state transportation funding.

The locations were selected based on a combination of hard data from traffic counts and observations from public works staff about where there are high volumes of bicyclists.

In each case, the city selected locations where the bicycle lanes and the traffic lanes “weave,” Sprinkle said.

There are numerous places in the city where bicyclists trying to go straight through an intersection need to move from the right side of the road several feet to the left to cross a lane for vehicles turning right, Sprinkle said.

A typical zone will be solid green at the beginning, dashed green in the transition zone, and then turn solid green again, Sprinkle said.

The move follows the lead of Rohnert Park and Windsor, which have installed similarly colorful lanes to remind drivers to share the road.

“They’ve been installed in quite a few cities in California as well as other states in the nation,” Massoud Saberian, an engineer in the city’s Transportation and Public Works Department, told the council earlier this year.

Vice Mayor Tom Schwedhelm, an avid cyclist, said he’s ridden in the lanes in Windsor and appreciates them, saying they give bicyclists a “feeling of safety.”

Councilman Gary Wysocky, who has had some close calls in such “weave zones” in his years in the saddle, said he was looking forward to the new lanes.

“Anything to delineate the proper travel lane is welcome,” he said.

In 2014, Wysocky was caught on camera shouting an obscenity at a city bus driver he claimed had cut him off in one such zone on Brookwood Avenue north of the Santa Rosa Police Department.

That location is not one slated to receive a paint job in this round. 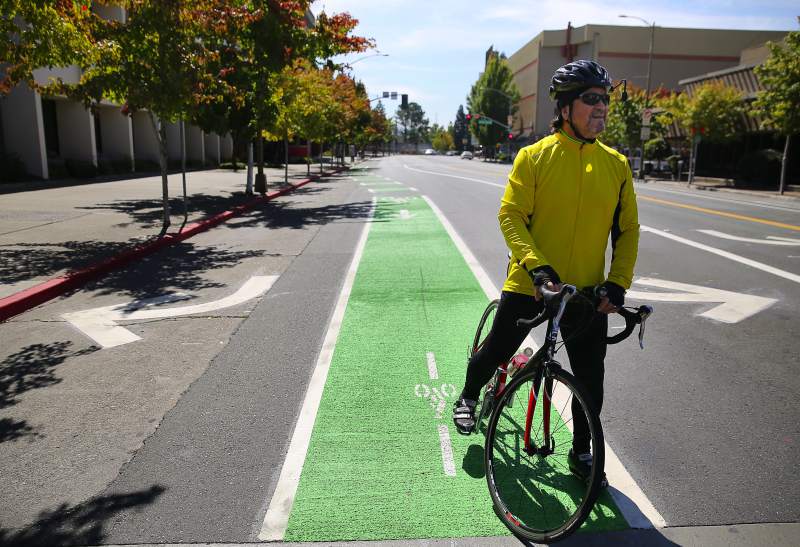