Ricardo Paniagua had never stood on his artwork, but his first experience was quite an engaging one.

“It felt like I was walking on an electrical grid. I felt like it was alive. It just made me feel really energized,” said Paniagua, who normally exhibits his geometrically-oriented work in museums and galleries.

The machine evenly distributes heat over the street surface to ingrain the 125 milimeter-thick thermoplastic to the pavement, making it more durable than a paint or coating that is rolled or sprayed on, said Lori Dulworth, a regional sales manager for Ennis-Flint. 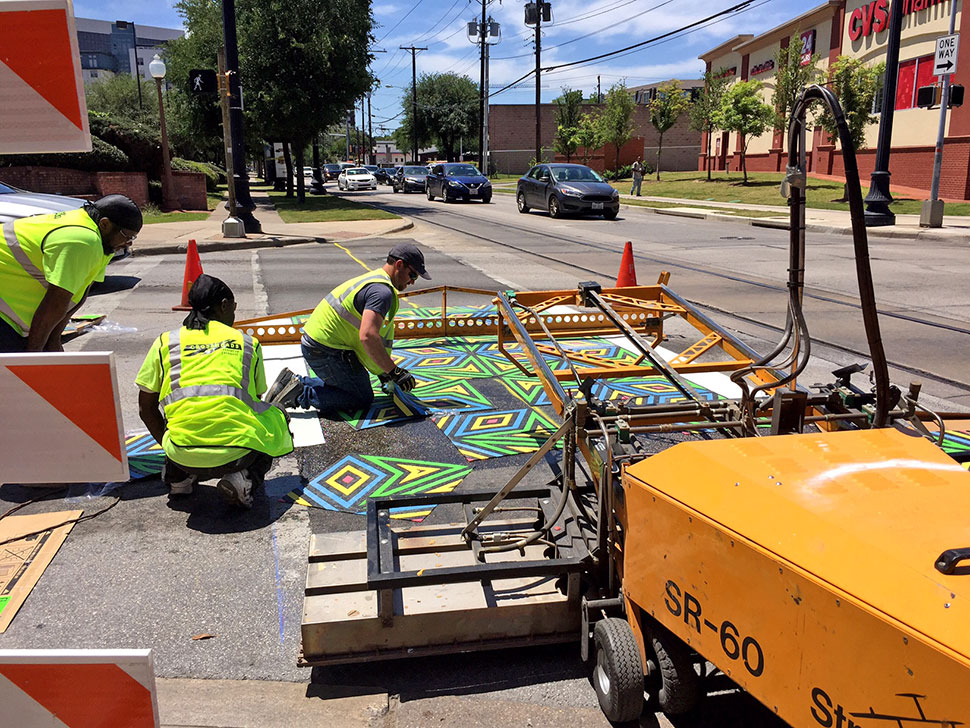 The material, generally used for regulatory pavement markings, is non-slip and designed to withstand car and pedestrian traffic. It’s marketed to last up to eight years.

The leading traffic solutions and pavement marker company has done other custom art crosswalks across the country, but none in the Dallas-Fort Worth area, Dulworth said.

“It was just something outside of the box that Dallas hasn’t done before,” said Anita Simmons, director of marketing and communications for Uptown Dallas Inc.

Simmons said the public improvement district has been working for a while to bring the crosswalk art to Uptown.

It originally came up with the idea more than two years ago, when it partnered with Public City to brainstorm ways to bring more public art to the neighborhood. She said Uptown Dallas thought it would be a fast-moving project, but securing the proper permits from the city of Dallas took longer than anticipated.

Last week, the concept finally become a reality when workers marked the pavement at the intersection of McKinney and Lemmon avenues with electric blue, yellow, and green geometric shapes.

Simmons believes the more defined path will help draw attention to the crosswalk for pedestrians in the high traffic area near West Village.

“It’s so visible. The white stripes that outline it really tell cars to stop back a little further. It gives the walkway for pedestrians,” she said.

“The colors and geometric design are really interesting. I think everyone will stop and take a look in a good way.”

Paniagua said he’s already received numerous calls from people recognizing his work on the road. He said his design was changed some during the installation process, but he hopes the work will still be thought-provoking.

“My designs are meant to get into people’s brains … pique their interest, engage them, or open them up to a new idea,” he said.

For Uptown Dallas, the crosswalk is one part of a larger initiative to bring more public art to the neighborhood.

Recently, three sculptures from artist Nic Noblique were installed in the Anita Harris Phelps Park off Cedar Springs Road. More sculptures from other artists are in the works for other parts of the neighborhood.

One of the next projects for Uptown Dallas will be livening up underpasses along the Katy Trail.

“There are some walls there that are just screaming for some fun artwork,” Simmons said.

Plus, Uptown Dallas would like to transform more area crosswalks into works of art in the future.

“There’s a lot of walkability throughout Uptown, so I think the opportunity to add these artistic crosswalks in other locations is a win-win,” Simmons said.