Public Works Director Chris Saley said he wasn’t 100% behind Mayor Ben Blake’s idea for brick-look crosswalks in downtown Milford. But the mayor pushed, and Saley supported the idea, and now people are praising the new high visibility walkways at the intersection of Daniel and River streets in downtown Milford.  So Saley says Mayor Ben Blake gets the credit.  “He saw them in another town, and he really pushed for them,” Saley said.

The new crosswalks look like brick but they are not brick.  Rather they are a “durable preformed thermoplastic material” that is skid resistant and durable, according to the Laydon Industries website, the company that set the new crosswalks.  A special material is first placed atop the asphalt, heated, and then stamped to produce the desired pattern.  Saley said part of the reason the city recently resurfaced the downtown roadways was to pave the way for the new crosswalks.

The brick-look crosswalks are expected to calm traffic and make the intersection safer for pedestrians. Saley said the material is supposed to last at least 15 years.  The city paid about $21,000 for the three crosswalks done so far: Saley said the company charges per square foot. According to Mayor Ben Blake, some of the funds came from a state road aid grant.

This first phase was sort of an experiment, Blake said. The city focused on putting the high-visibility crosswalks in an area with heavy pedestrian traffic — the area where people cross to get to Cafe Atlantique and the other River Street shops, and where commuters often cross on the way to and from the train station.

“This is a relatively new process,” Blake said, adding that he had seen this type of material used in New Haven.  In the few days since the brick pattern started being placed on the street, residents have reacted favorably, Blake and Saley said.

The city is looking to resurface other downtown crosswalks with a similar pattern. The mayor said that next will likely be the four-way intersection where Subway and the Milford Chamber of Commerce are located.

Photo: Pedestrians use the new brick-look crosswalk at the intersection of River and Daniel streets in downtown Milford. — Ralph Petitti photo 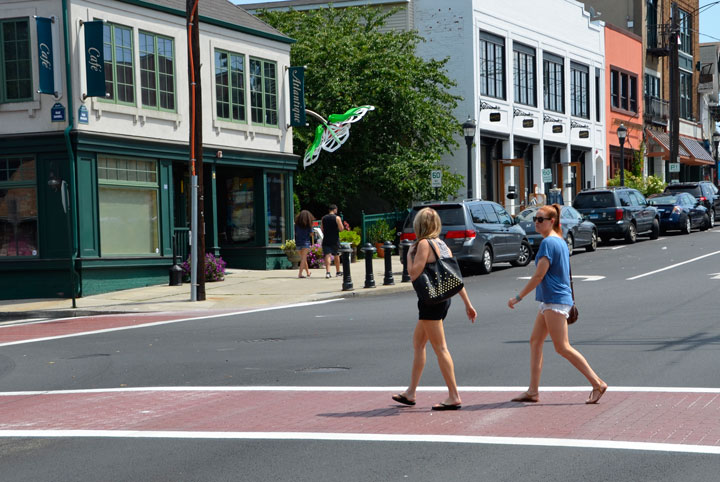