New Bike Box Offers Cyclists Their Own Spot in Traffic

More than a dozen people on bicycles pedaled down Church Street in Nashville on Wednesday evening, rolling to a stop inside a large green painted square just ahead of a white minivan.

The group was testing the city’s first bike box — a space at an intersection that allows cyclists to cut ahead of traffic and wait in their own specially designated area until the light turns green.

The boxes are growing in popularity across the country as communities search for ways to reduce accidents between cyclists and motorists and encourage more people to use bicycles to get around. More than 20 cities have painted them at intersections, according to Metro Public Works.

“The new bike box is another step toward our continuing efforts to providing more, and more complete, street transportation options through roadway infrastructure improvements,” Randy Lovett, the acting director of Metro Public Works, said in a news release.

The new box comes about a month after public works made changes to the Church Street bridge that reduced the number of traffic lanes from four to two with a center turning lane. The officials took the extra space to create buffered bicycle lanes on both sides of the street.

The recent additions are evidence that the city is trying to make progress in providing places that are safer for cyclists, said Liz Thompson, executive director of Walk/Bike Nashville, a nonprofit that promotes cycling and walking as transportation alternatives.

“This is exciting that, typically, Nashville has been a little slow-moving in installing bike lanes,” she said. “We are now becoming one of the first in the South to do one of these things.”

The more bike lanes and boxes that the city can install, the more people will become comfortable with the idea of using bicycles as a transportation option, Thompson said. Those pavement markings also help clear up confusion when autos meet bicycles on the roadways.

“There’s a lot of misunderstanding for the rules of the road between bicyclers and motorists,” Thompson said. “When there’s a bike lane and bike box that gives you space up ahead, that in general that can reduce a lot of that tension.”

But adding those lanes sometimes comes with a tradeoff — such as losing two lanes of traffic for motorists on Church Street.

In recent weeks, Jerry McCaskill has seen the traffic back up on the street from Interstate 40 all the way to the YMCA a half-mile away.

McCaskill, an attorney, works downtown and uses the street daily on his commute. He questioned whether it was the right spot to reduce lanes.

“I don’t want to come off as someone who is anti-bicycle,” he said. “I don’t know that this was the smartest fix.”

The group of cyclists who approached the new bike box on Wednesday evening certainly looked a bit out of place, as they stopped short inside the bike lane about 50 yards from the new box. The traffic light was green, and once it turned red they made their way to the box to fill in the space.

Nora Kern was one of the cyclists riding with the group that had been organized by Walk/Bike Nashville.

For about six months, Kern, 24, has been commuting to her job at the nonprofit group. She said as the population of the city grows, the streets around Nashville’s urban core won’t be able to accommodate a car for every person.

“We have to start now to start planning for the future of Nashville,” she said. “In five years, if we wait, it’s going to be 100 times harder.” 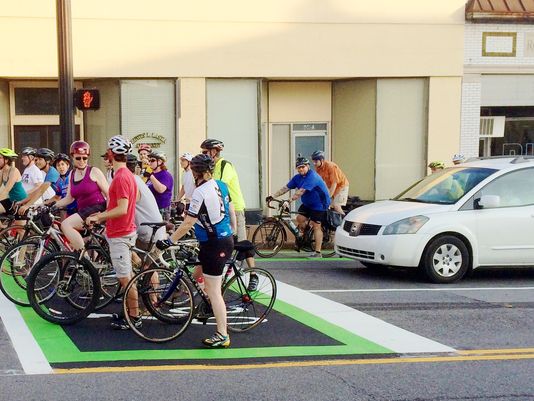