The city is experimenting with green bicycle lanes in front of Lakewood High School to encourage safety between cars and bicycles.

City and Bike Cleveland officials believe Lakewood is the first community in Cuyahoga County to try the green lanes for areas with high volumes of car and bicycle traffic.

The experiment is small, but if it proves successful, residents soon could see green bike lanes elsewhere in Lakewood that are designated "bicycle-vehicle conflict zones."

"I look forward to broader use of green markings and to more best practices in Lakewood as we pursue our goal of becoming the most bicycle-friendly city in Ohio," at-large City Councilman Thomas Bullock said. "It's not brand new to the nation, but it is new to the region. I am proud that Lakewood is the first to implement this new best practice."

The League of American Bicyclists in 2013 recognized Lakewood as a bronze-level Bicycle Friendly Community. The award recognizes the city's efforts to improve conditions for bike riders through educational programs, infrastructure and policies.

Bullock was instrumental in convincing Ennis-Flint Inc., a manufacturer of pavement-marking materials, to pay for a demonstration project on two short sections of Franklin Boulevard in front of Lakewood High School. He contacted the company after reading about its product.

"It offers higher visibility," Bryce Sylvester, of the city's planning and development department, said. "It's a visible cue to all travelers that the road is for bikes and cars."

The company last week applied green-colored methyl methacrylate to short sections of existing bicycle lanes in front of the school at two locations where bike lanes cross school driveways. The material, sold under the trade name CycleGrip, is similar to green paint but about nine times as thick and longer lasting. While normal paint might wear away in less than a year in high traffic areas, CycleGrip should last seven to nine years, said Jeff Trondle, a company employee who arranged the demonstration.

"The green will always be green all the way through the life of the material," Trondle said. "The material I put down will fuse to the roadway and should not fail unless the road fails."

However, the city wants to see how the pavement survives the winter with applications of salt and snowplows scraping the surface.

The Federal Highway Administration approved the green color for bike lanes in 2011, and it has been popular in Oregon and other western states, Trondle said. The green has been slower to catch on in the Midwest. It was tried about two years ago at a bicycle crossing in Oberlin, and it has held up well, city officials said.

One of the problems with bike lanes is it not being noticed by drivers," Pishnery said. "We've seen that with collisions and fatalities. Anything that makes a bicyclist more visible on the road is a huge safety boon." 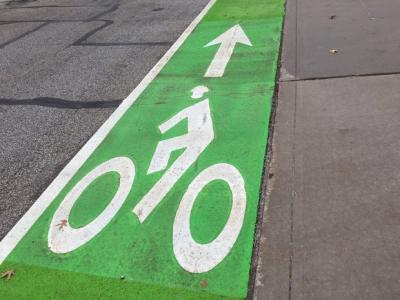